An Unexpected Gift on My Path to Adoption 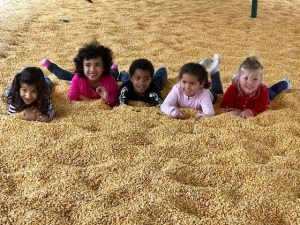 In the summer of 2011, I sat in a conference room at JF&CS Adoption Resources eating Panera sandwiches with five women that I didn’t know at all. We were there because we had one thing in common: we were all single women who wanted to become moms through the gift of adoption.

Fast forward to this October, we are all together again. This time, at a local farm, munching on cider donuts while our kids, ranging in age from three to six, play together in a vat of corn kernels. This journey from strangers to friends has been one of the most amazing blessings of my life. Of all of the surprises that my path to becoming a mom has brought me, the relationships that evolved from the adoption of my daughter via Adoption Resources are the sweetest.

In the beginning, I was just grateful to know that I wasn’t alone in hoping to adopt a newborn baby domestically as a single woman. Slowly, as we were each matched with birth parents and babies, our Adoption Resources “support group” became a true anchor for each of us. We calmed each other when birth parents wavered, sent emails and pictures when babies were born, and cried with joy when adoptions were finalized. We visited each other during maternity leaves, texted advice on how to use Yoga to calm a crying baby, and handed down onesies. We began meeting four times a year for a playgroup and slowly, our circle was widening. We met other single adoptive moms in our neighborhoods, through Adoption Resources, and even online. We gathered at playgrounds to push our babies in swings, at farms to stop our toddlers from jumping in mud, and at beaches to watch our kids run into the waves. We hosted loud, messy Halloween parties filled with costumed children, caramel apples, and laughter.

Over the years, people have come in and out of our playgroup, but the core five of us have remained. While we all know how important and wonderful it is for our kids to have each other, to know other children whose families are like theirs, I think we have remained close for another, just as important reason. We have been with each other from the beginning, when motherhood was only a hope. We now live through the uncertainties as well as the joys of parenthood with each other. We have become more than a “waiting support group,” more than an adoption playgroup. We have become family.