The Family We Were Destined to Be 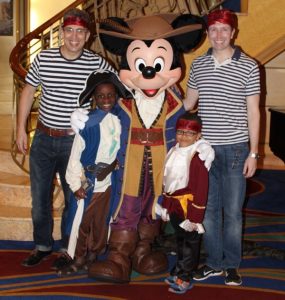 “I know this is a little unorthodox as you haven’t applied to our agency yet, but I think I have a baby for you.” These were words spoken by Betsy Hochberg, Director of JF&CS Adoption Resources, three months after I had met with her for an informational interview. She was right: I hadn’t applied to her agency yet, or any agency for that matter.

I was still putting together my adoption book, figuring out my work’s parental leave policy, preparing for a home study: the myriad items on an adoptive parent’s checklist.

I met Betsy in September of 2007. I had been gingerly putting my toe in the unknown waters of domestic adoption and I was eager but pessimistic: I was 44 years old, male, soon-to-be single, and gay. It didn’t seem like an auspicious combination of traits. I can’t remember what fortuitous chain of events led me to Adoption Resources. Perhaps a serendipitous Google search or maybe a friend’s recommendation but somehow I was sitting in Betsy’s office, nervous as hell, and she said to me: “You’re going to be a great dad. A pregnant woman would be thrilled to choose you as an adoptive father.” It was one of those transformative moments I will never forget.

Three months later I was having dinner in Quincy Market with a pregnant teenager from New Hampshire, the teenager’s parents, and Betsy. It seemed a match made in heaven. But, it was not to be. The pregnant girl was ambivalent and changed her mind about adoption shortly after my would-be daughter’s birth. I was devastated. But, as Betsy taught me, the child that you are destined to have is the child you get. This was not my child.

Less than a year later, I came home from Texas with my son, Kofi, the child I was meant to have. It had been a long journey full of the typical roller coaster of emotions that is part and parcel to the adoption path, but he was in my arms, instantly loved, and somehow, miraculously mine. It was the happy ending we all wait for, the beginning of an adventure that is unpredictable, challenging, and exhausting but ineffably joyful. Within a few months I met my now husband, Rob, and soon after we adopted our second son, Gil.

I am ever grateful to Adoption Resources and, in particular, to Betsy who opened the door for me, beckoned me across the threshold, and stood beside me through the sometimes arduous process. The anticipation, the heartache, the exhilaration, the anxiety, the disbelief: we were spared none of the emotions adoptive parents routinely report. But we had amazing support from Betsy and her team. I had found the family I had always wanted, though, admittedly, the path to this end was never obvious to me and full of unexpected twists and turns. Yet, somehow, miraculously, we all arrived. We are, in fact, the family we were destined to be.